THE DUKE OF YORK CUP

FINAL CLASSIC OF THE SEASON

THE DUKE OF YORK CUP

The Duke of York Cup is said to be one of the most beautiful classic of the season, after The Maiden Cup.  It will be run on Saturday 29th October 2016 and promises to be an interesting day.
Entries : Charles Lytton, Recall To Life, Karraar, Scotsnog, Prince of Thieves, Kremlin Captain, Bouclette Top, Tandragee, One Cool Dude, Parachute Man, Captain Magpie, Blow Me Away, Hillbrow, Sheer Trouble. 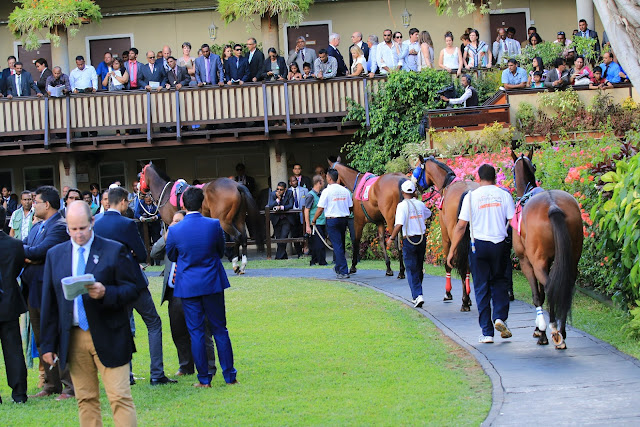 SOME NEWS FROM MTC - TRAINING SESSION OF TUESDAY 25TH

Who impressed?  :  Beluga, Trackmaster, League of Legends, Red Hot Poker, Answeringenesis, Sir Earl Grey (wore blinkers), Elite Class, In Your Dreams, Power to Please, Rear Admiral, Fort Ozark, Tigre Libre and Lucky Valentine.  Those present at this very early training, were particularly focused on the participants of the Duke of York Cup and were gifted with grass gallops.  From the grass,  'grande piste', Kremlin Captain and Bouclette Top showed progress and Apple Pie had quite some difficulties to keep up with these two.   Captain Magpie and Ashanti Gold presented themselves as sparring-partner.
From the sand,  'small piste', One Cool Dude and Parachute Man, who won the Maiden 20116, did very well and Charles Lytton showed how fit it is... 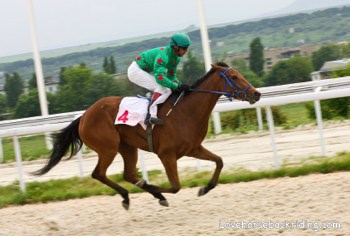 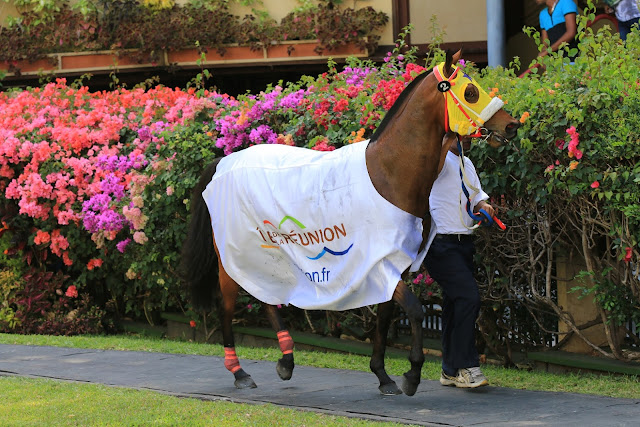 Every Saturday the Crown Lodge has the privilege of hosting elegant ladies... 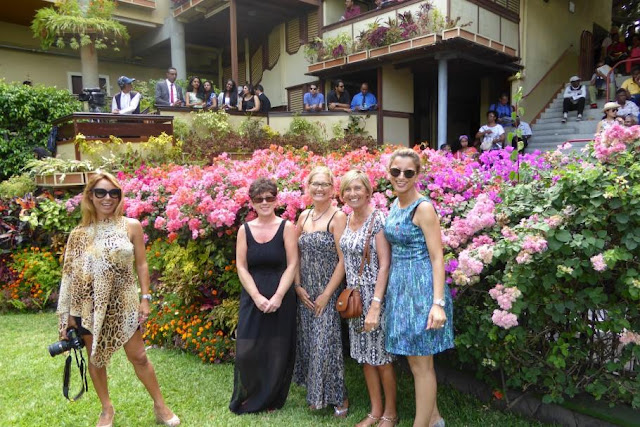 Jacques is always 'aux petits soins' for all his guests.  He will share his passion for horses with you having himself participated in the 'gentlemen riders' some years ago.  He will take the time to have a word with each of his guests despite his busy schedule in running this particular chic suite... 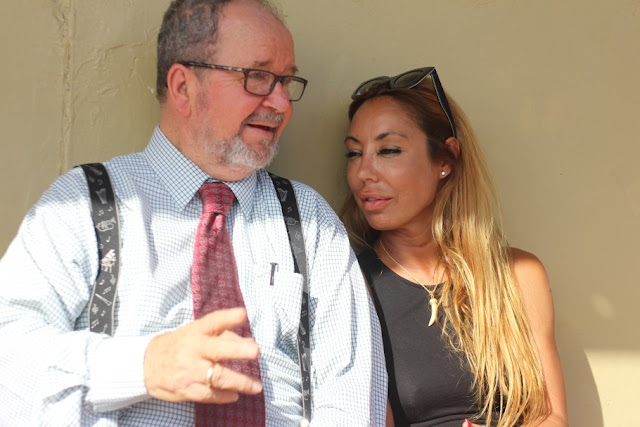 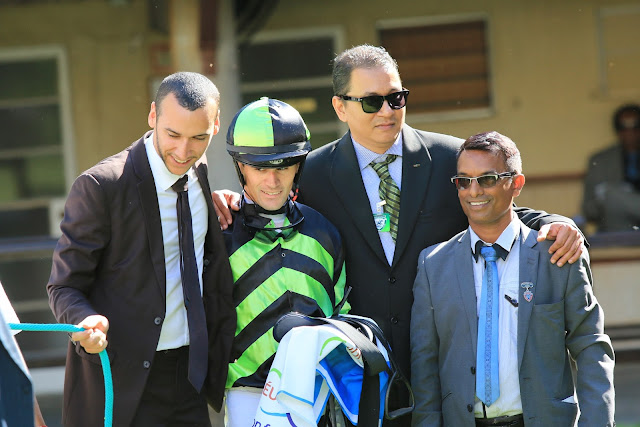 SUCH A BEAUTIFUL PLACE !

Isn't that place beautiful ?  The ambiance can be felt the moment you step in.  Jacques will share with you the history behind the Mauritius Turf Club... 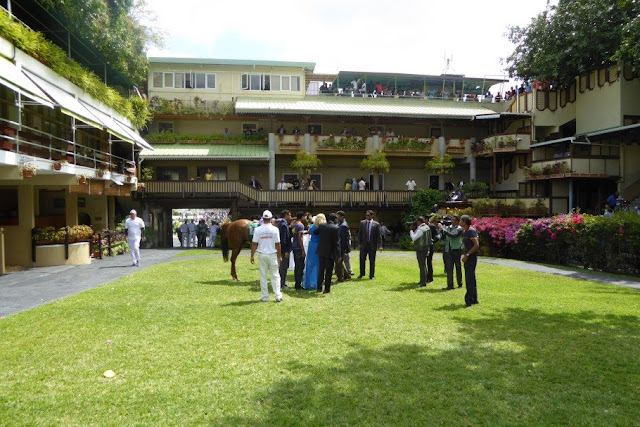 A DAY AT THE CROWN LODGE, A PLEASURE FOR ALL !

Who said you had to stay in your hotel room all the time if you have a physical handicap ?  Jacques will take you out !  That guy is not only enjoying his Phoenix Beer but his whole day at the Crown Lodge! 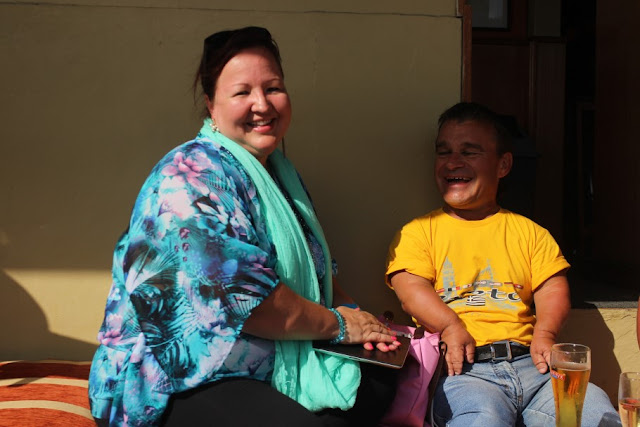 A FEW TIPS FROM US

The Duke of York Cup : Charles Lytton is the favourite in this last classic but the Maiden Winner, Parachute Man is going to be a very good opponent too; it will have the first run on the favourite! Watch Karraar as well...

In the 2nd race, though Beluga is the hot one, the first time blinkers Valerine will be a good outsider...

Good luck to all and thanks again for choosing to spend this exciting day with the Crown Lodge and indulge in the Mauritius Horse Racing atmosphere.  A souvenir you will cherish for long...

Posted by Jacques Ritter's Crown Lodge at 20:14 No comments:

Email ThisBlogThis!Share to TwitterShare to FacebookShare to Pinterest
Labels: chic, great ambiance, last classic of the season, must do in Mauritius

NO SHADES OF GREY ASSURED THIS SATURDAY !

Following the running of race 3, the stewards took evidence from riders, trainers and the Track Manager.  It was established that due to heavy downpour following the running of race 1, the track had become unsafe.  As such for safety reasons, acting under the provisions of MTC Rule 12 (f), the stewards after consultation with the administrative stewards, cancelled the remaining races of Saturday 8th October...  False rails will be placed today on Saturday 15th October...

For the security of the jockeys and the horses, the 28th meeting had to close after the 3rd race... see for yourself


The rain came in as a 'trouble fête' last Saturday but the Gambling Regulatory Authority (G.R.A.) has informed the Mauritius Turf Club that it has acceded to his request to hold 9 races during the 29th meeting, i.e this Saturday 15th October, 2016. With this additional race, the meeting will start at 12H20.

What does the Mauritius Turf Club say about the training sessions?

Polar Palace seems to be in great shape and Beach in a Bottle was wearing blinkers, a tongue tie and a nose band.
Captain's Cronicle, Rebel's Game and Roventas worked fast and their companion, Parachute Man did not go unnoticed.
Karraar is said to be in great shape too... 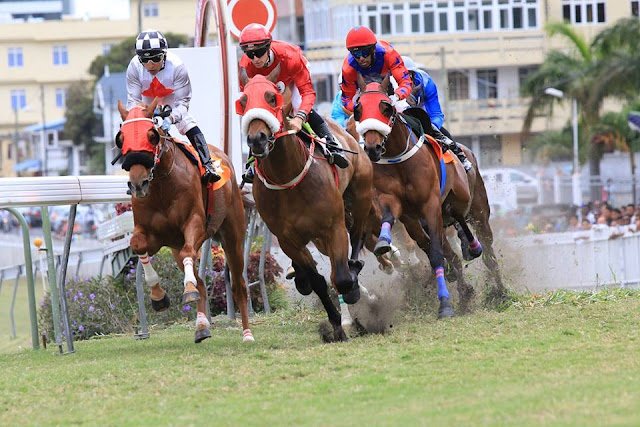 A FEW TIPS FROM US

In the main race,i.e. the 6th one, Charles Leytton will be a hard nut to crack as it drew the first draw...Top Jet with its light weight is a very good placing bet for a very good finish...Super Glue is a normal favourite with its 3rd draw.  Mr Leyend should be in the trifecta if it does not hand in the straight.  In the last race, Data Controller should be watched as well as Billy Bojangles who worked well during track works.

A little bit of history

The Champ de Mars racecourse is the oldest racecourse in the Southern Hemisphere...and the 2nd oldest in the world.  Founded by Britain's Colonel Draper, under the aegis of the Mauritius Turf Club, the track first held its races in June 1812.

Some pics of our guests last Saturday 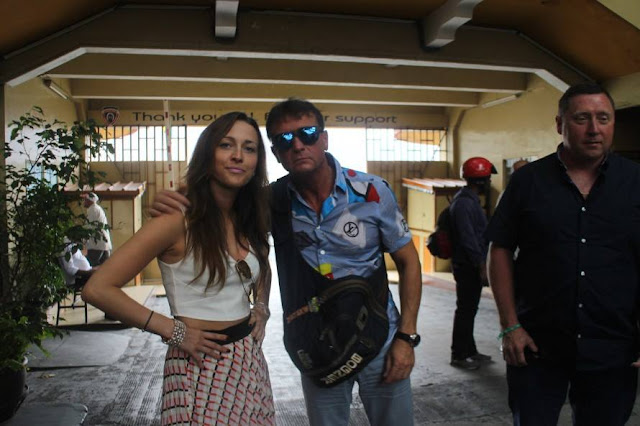 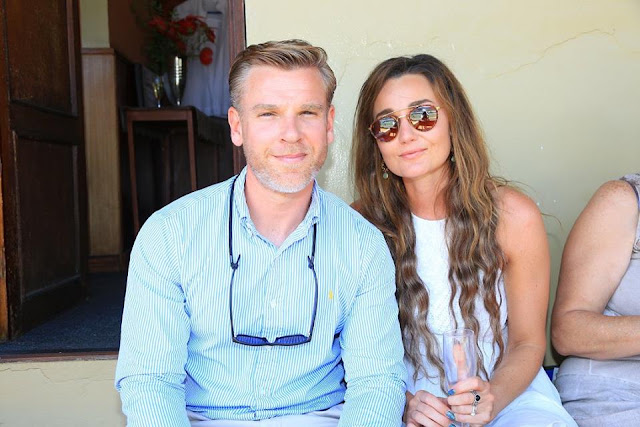 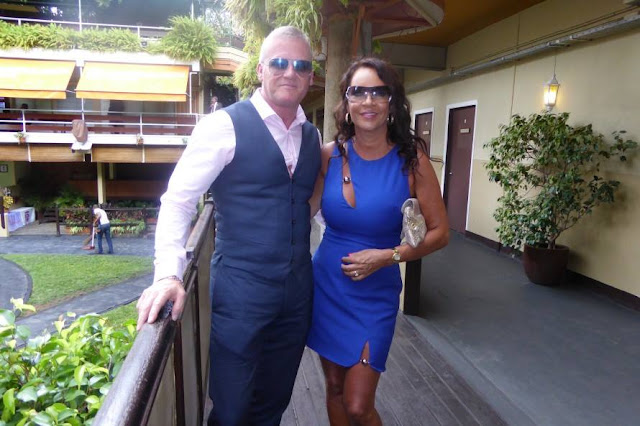 All Chic and Gorgeous

What did they say ?

Merethe Due Hansen : Thanks for a lovely day, we had lots of fun - rain or no rain !

Mike Scofield : Pity about the rain, but a really good day regardless !

Fabulous day out!  Would recommend it to anyone holidaying in Mauritius!  We were looked after so well by the whole team who fed and watered us all day - nothing was too much trouble!! Thank you everyone !

Fantastic day out !  Great food and drink, great company, would definitely recommend a day at the races whilst in Mauritius.

Superb experience!  Absolutely loved it ! Jacques and the staff are wonderful hosts !  So friendly and welcoming.  Met some lovely people.  A day out not to be missed.

Excellent day Jack Lad, a few more winners would have been great but the beer and champagne was flowing ... so !  who cares ? !  A recommended day out in Mauritius for sure. 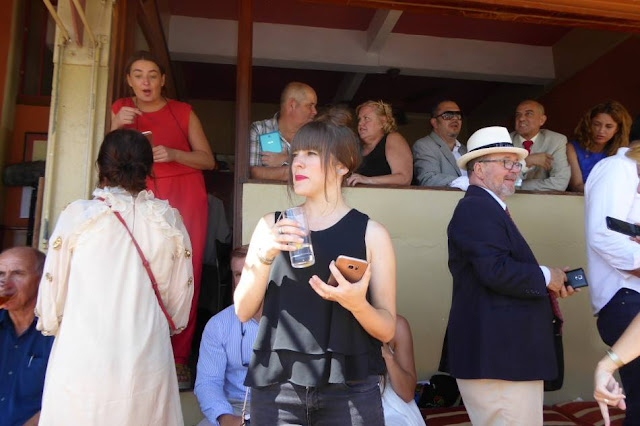 Posted by Jacques Ritter's Crown Lodge at 23:07 No comments:

Email ThisBlogThis!Share to TwitterShare to FacebookShare to Pinterest
Labels: great entertainment, horse racing, must do in Mauritius

Who impressed at training sessions this week ?

A few tips from us :

The main race looks very open.  Nordic Warrior should be the one leading.   Did not run since 20th of August but has been working on his endurance during his track work.  Could be an upset if he can lead all the way... However Tandragee could be a threat as he was a big runner on his last outing despite his being 8 years old.  Top Jet should not be ignored as he has a nice turn of foot plus he had the best 400 metres last time. In the last race, nos 2, 3 and 4 look good (no. 4 looked like a winner on track-work); those who like outsiders, a win and place bet on Halabaloo - showed 'something' in his last outing...

Beluga : on his first race in Mauritius, impressed; should make it again tomorrow.  Keep an eye ! 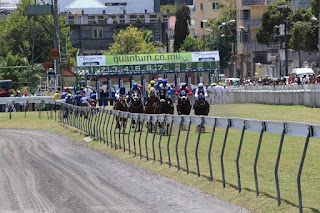 How many fixtures left for 2016 season ? 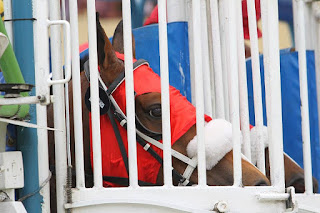 What our Guests say ?

The Crown Lodge and Jacques were a fabulous experience in Mauritius.  Something different off the normal beat and path of the beautiful beaches.  Well worth the trip into Port Louis.  The hospitality was top notch.  We enjoyed sharing the suite with other guests from all over the world and made some lasting friendships.  The VIP treatment was fantastic.  I would highly recommend it for anyone visiting Mauritius. 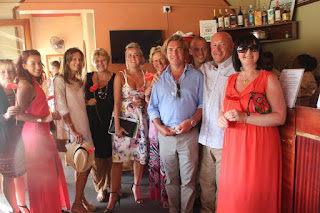 What a day my wife and I had at the Crown Lodge at the Champ de Mars racecourse.  We booked the Crown Lodge, were picked up at our hotel, arrived at the Champ de Mars just before midday, all our drinks and food were included in the package up until 17H00 whilst having a great day's racing.  JR the host was great, a very good host I must say.  It is a must if you love horse racing as my wife and I do.  We were then taken back to our hotel.  A great day!  By both of us.  Thank you JR ! 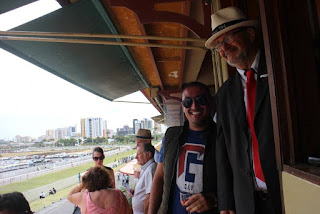 Posted by Jacques Ritter's Crown Lodge at 01:38 No comments:

This place should be listed as one of the top places to go when in Mauritius.  The atmosphere was amazing, the drinks were all included in the price and we could drink as much as we liked.  The food was all homemade and delicious and the Host Jacques, was a great personality who made us feel all welcome and took some of us to the jockeys weigh in room so we could see things close up and talk to the experts.  There was also someone taking photos of the whole day too which was then emailed to us and posted onto the Crown Lodge Facebook page.  So if you are thinking of treating yourself to this day out don't hesitate, you will love it.  We won 8000 rupees on one of the horses that came in 36/1 so went home very happy.

We were met in person by Jacques and his staff who showed us the parade ring and paddock.  We were then escorted to the Crown Lodge which is a pleasant room and has a balcony overlooking the course, about 30m from the winning post.  Everyone there, about 20/30, received complimentary canapes, sandwiches, bubbly, wine and beer throughout the afternoon of a pretty good 8 horse racing event.  Overall a FANTASTIC day out,  Thanks Jacques, Stacy and all!

Group outing with some friends.
We were greeted on arrival and shown to the box.  We had a bar with free drinks, a place to place bets at fixed odds, the opportunity to go and view the horses in the parade ring and a great view of the race track!  Some races started directly outside! The staff were very friendly and efficient, drinks were topped up before you knew they needed to be... Christelle (hope I got her name right) was brillant!

Snacks were plentiful, the dohl purri lunch was great - just remember wen eating that the Mauritian idea of what is mild may not tally up to yours :-) delicious but spicy! :-) All in all an excellent day, excellent staff and great fun all round  Would highly recommend.  Just a shame our visitors are coming in the off season as I would like to bring them here for a day out :-)

Great Place to be !!!!
Nice day there, really enjoy and nice people also.  I definitely recommend you people to pay a visit there!

Posted by Jacques Ritter's Crown Lodge at 08:55 No comments: